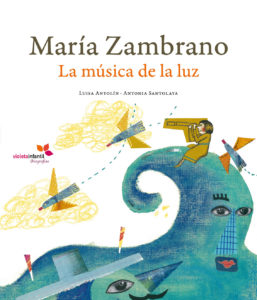 (María Zambrano: the music of light)

María Zambrano was born in Málaga, but she lived in different cities because her parents were teachers. She always wanted to know the reason for everything, and it was this passion for wisdom that led her to study philosophy. During the war she had to go into exile, but she continued using her words as a weapon to achieve a life full of justice and freedom.

This book focuses on María Zambrano’s brave and hard life; her achievements are a great example for future generations. It’s a bilingual edition (Spanish/English) including lovely illustrations.