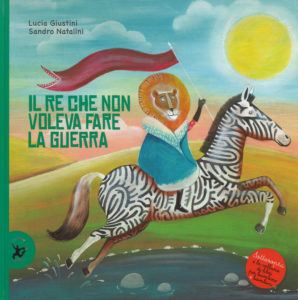 King Fiorenzo is a peaceful king, and he is determined to never go to war, not even to extend the boundaries of his kingdom. He likes sleeping, lying down on the grass, looking at the sky, and walking on horseback in the forest. He sets off on a journey with some young men of his kingdom, some of whom will decide to stay in the villages where the group stops. But in the end King Fiorenzo will discover that he is not the only one who hates war. And that there is another king, as stubborn as him, who just wants peace.

The book deals with the theme of war and violence from an inverted perspective: King Fiorenzo proves that violence is not – as some would want us to believe – innate, especially in men, but that it is the solution chosen by those who refuse to seek the more difficult way of peace. The series “Sottosopra,” edited by Irene Biemmi, was conceived with the clear aim of proposing an alternative dimension through picture books that promote gender equality. The protagonists of these books therefore feel free to act, think, and behave without constraints linked to their biological sex and social conventions.

it
Also available in: