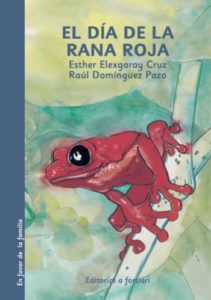 King Abdón and queen Ingrid live with their son, prince Héctor, in a tiny kingdom. On the day of his christening, the countess Mordana gets angry because she isn’t chosen as his godmother, so she casts a spell on the boy. When the prince grows up, everyone looks for the red frog. One night, a beautiful girl called Laura arrives at the palace with a red frog. Prince Hector kisses her, and suddenly a handsome prince appears before them. Laura and the princes live as a happy family.

This book describes heterosexual and single-parent families in a simple way. Colour illlustrations and the influence of fairy tales’ structure make its reading easy for primary school readers. They will learn that a real family is defined by love, neither by gender nor race.