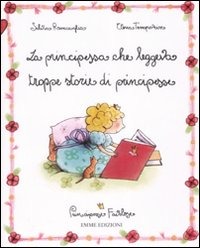 Serena is a little princess who, as any other child, likes hearing a goodnight story before falling asleep. But she only wants to hear fairy tales about princesses. Over time, Serena gets influenced a little too much by the stories she is told! In fact, when she becomes a woman, the princess claims to find a husband just like in fairy tales. She sets off on a journey, determined to kiss all the frogs she meets, convinced that at least one of them will necessarily turn into a prince…

Written by Silvia Roncaglia and illustrated by Elena Temporin, this is the first of a series of books which subverts all the clichés and literary topoi attached to the figure of the princess in traditional fairy tales, in an ironic and funny way. In this case, the protagonist is so obsessed with the clichés of princesses that she makes a fool of herself on several occasions, until she eventually understands that life is not a fairy tale and that it can be much more fun. The series is made up of 14 books published between 2008 and 2014. Each book presents a different and unconventional princess, whose diversity is usually the driving force of the story and the key to the epilogue: the quarrelsome princess, the bumbling princess, the princess who wants to know the reason of everything, the athletic princess, the pirate princess, etc. And although all the stories end with a marriage, the selected grooms are very different from those of fairy tales: they are not rich, they do not have blue bloods, they are not always beautiful, they are not brave. But here the princesses have an active role on their destinies: they are not chosen, and they choose their husbands out of love. These stories are recommended also for boys, who can find here unconventional and exciting male characters, as well as funny situations.

bs
es
it
Also available in: